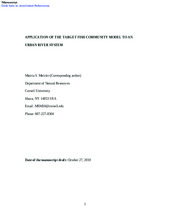 Application of the target fish community model to an urban river system (2011)
Marcia S. Meixler
Journal of Environmental Management 92(4): 1138-1147.
Link to published version
VersionAccepted Manuscript (AM)
AbstractSeveral models have been developed to assess the biological integrity of aquatic systems using fish community data. One of these, the target fish community (TFC) model, has been used primarily to assess the biological integrity of larger, mainstem rivers in southern New England with basins characterized by dispersed human activities. We tested the efficacy of the TFC approach to specify the fish community in the highly urbanized Charles River watershed in eastern Massachusetts. To create a TFC for the Charles River we assembled a list of fish species that historically inhabited the Charles River watershed, identified geomorphically and zoogeographically similar reference rivers regarded as being in high quality condition, amassed fish survey data for the reference rivers, and extracted from the collections the information needed to define a TFC. We used a similarity measurement method to assess the extent to which the study river community complies with the TFC and an inference approach to summarize the manner in which the existing fish community differed from target conditions. The five most abundant species in the TFC were common shiners (34%), fallfish (17%) redbreast sunfish (11%), white suckers (8%), and American eel (7%). Three of the five species predicted to be most abundant in the TFC were scarce or absent in the existing river community. Further, the river was dominated by macrohabitat generalists (99%) while the TFC was predicted to contain 19% fluvial specialist species, 43% fluvial dependent species, and 38% macrohabitat generalist species. In addition, while the target community was dominated by fish intolerant (37%) and moderately tolerant (39%) of water quality degradation, the existing community was dominated by tolerant individuals (59%) and lacked intolerant species expected in the TFC. Similarity scores for species, habitat use specialization, and water quality degradation tolerance categories were 28%, 35% and 66%, respectively. The clear pattern of deviations from target conditions when observing fish habitat requirements strongly suggests that physical habitat change should be a priority for river enhancement in the Charles River. Comparison of our target and existing fish communities to those from a comprehensive study of Northeastern fish assemblage responses to urban intensity gradients revealed very similar results. Likewise, comparison of our TFC community and affinity scores to those of other TFCs from similar regions also yielded similar results and encouraging findings. Based on the positive results of these comparisons, the utility of the findings from the inference approach, and the widespread adoption of the TFC in the Northeast US, it appears that the TFC approach can be used effectively to identify the composition of a healthy fish community and guide river enhancements in both highly urbanized and non-urbanized streams and rivers in the Northeast US.
Persistent URLhttps://doi.org/doi:10.7282/T39P33M7
SubjectsTarget fish community, River enhancement, Charles River, Habitat, Water quality, Urbanization, Biological integrity
RightsCopyright for scholarly resources published in RUcore is retained by the copyright holder. By virtue of its appearance in this open access medium, you are free to use this resource, with proper attribution, in educational and other non-commercial settings. Other uses, such as reproduction or republication, may require the permission of the copyright holder.
RightsThis work has been licensed by the rightsholder under a Creative Commons Attribution-NonCommercial-NoDerivs (CC BY-NC-ND) 4.0 International License (https://creativecommons.org/licenses/by-nc-nd/4.0/).