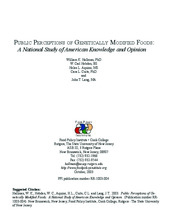 Public Perceptions of Genetically Modified Foods: A National Study of American Knowledge and Opinion (2003)
William K. Hallman, W. Carl Hebden, Helen L. Aquino, Cara L. Cuite, John T. Lang
AbstractThis report presents the results from the second phase of a longitudinal study of Americans’ knowledge and feelings about agricultural biotechnology and how those perceptions and attitudes have changed over time. Two independent national probability samples of 1,200 adults were interviewed by phone in the spring of 2001 and 2003. While this report focuses on the findings from 2003, longitudinal comparisons are presented where appropriate. The report begins with an investigation of Americans’ awareness of the presence of genetically modified (GM) ingredients in the foods they encounter everyday. Next, the report describes Americans’ actual and perceived knowledge of science, biotechnology and food production. It then examines American opinions about GM foods in general, along with their opinions on a variety of existing and potential GM food products with direct or indirect consumer benefits. The report discusses the relationship between opinions of GM food and a variety of factors, including demographics, knowledge of biotechnology, purchasing behaviors and styles of food selection. Finally, it describes Americans’ thoughts on GM food labeling.
Persistent URLhttps://doi.org/doi:10.7282/T37M0B7R
NoteSuggested Citation: