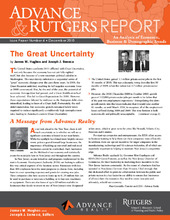 The Great Uncertainty (2010)
James W. Hughes, Joseph J. Seneca
Advance & Rutgers Report 4: 1-12.
Link to published version
VersionVersion of Record (VoR)
AbstractThe United States confronts 2011 afflicted with Great Uncertainty, not only because the economy has not yet fully righted itself, but also because of a new uncertain political calculus in Washington. This uncertainty culminates a sequential series of “great” economic changes over the past three years. In 2008, the Great Recession unfolded, reaching its full negative economic force as 2009 commenced. But, by the end of the year, the potential of economic Armageddon had passed, and a Great Stabilization had been achieved. This led to Great Expectations for 2010. However, these expectations faltered by mid-year as the European debt crisis intensified, leading to fears of a Great Stall. Fortunately, the stall didn’t materialize, but economic growth remained below levels required to reduce significantly a stubbornly high unemployment rate, leading to America’s current Great Uncertainty.
Persistent URLhttps://doi.org/doi:10.7282/T3KP80MC
SubjectsUncertainty, Great Recession (2007-2009), Recessions, Economic stabilization, Economy, Jobs, Growth, GDP, Gross domestic product, Economic development
RightsCopyright for scholarly resources published in RUcore is retained by the copyright holder. By virtue of its appearance in this open access medium, you are free to use this resource, with proper attribution, in educational and other non-commercial settings. Other uses, such as reproduction or republication, may require the permission of the copyright holder.