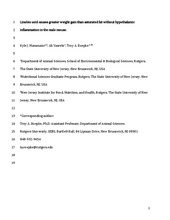 Linoleic acid causes greater weight gain than saturated fat without hypothalamic inflammation in the male mouse (2017)
Kyle Mamounis, Ali Yasrebi, Troy A. Roepke
Journal of Nutritional Biochemistry 40: 122-131.
Link to published version
VersionAccepted Manuscript (AM)
AbstractA significant change in the Western diet, concurrent with the obesity epidemic, was a substitution of saturated fatty acids with polyunsaturated, specifically linoleic acid (LA). Despite increasing investigation on type as well as amount of fat, it is unclear which fatty acids are most obesogenic. The objective of this study was to determine the obesogenic potency of LA vs. saturated fatty acids and the involvement of hypothalamic inflammation. Forty-eight mice were divided into four groups: low-fat or three high-fat diets (HFDs, 45% kcals from fat) with LA comprising 1%, 15% and 22.5% of kilocalories, the balance being saturated fatty acids. Over 12 weeks, bodyweight, body composition, food intake, calorimetry, and glycemia assays were performed. Arcuate nucleus and blood were collected for mRNA and protein analysis. All HFD-fed mice were heavier and less glucose tolerant than control. The diet with 22.5% LA caused greater bodyweight gain, decreased activity, and insulin resistance compared to control and 1% LA. All HFDs elevated leptin and decreased ghrelin in plasma. Neuropeptides gene expression was higher in 22.5% HFD. The inflammatory gene Ikk was suppressed in 1% and 22.5% LA. No consistent pattern of inflammatory gene expression was observed, with suppression and augmentation of genes by one or all of the HFDs relative to control. These data indicate that, in male mice, LA induces obesity and insulin resistance and reduces activity more than saturated fat, supporting the hypothesis that increased LA intake may be a contributor to the obesity epidemic.
Persistent URLhttps://doi.org/doi:10.7282/T3TF00QF
SubjectsObesity, HFD, Hypothalamic inflammation, Saturated fat, PUFA, Linoleic acid
RightsCopyright for scholarly resources published in RUcore is retained by the copyright holder. By virtue of its appearance in this open access medium, you are free to use this resource, with proper attribution, in educational and other non-commercial settings. Other uses, such as reproduction or republication, may require the permission of the copyright holder.