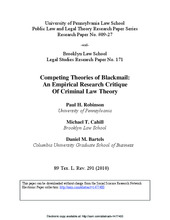 Competing Theories of Blackmail: An Empirical Research Critique of Criminal Law Theory (2010)
Paul H. Robinson, Michael T. Cahill, Daniel M. Bartels
Texas Law Review 89(2): 291-352.
VersionVersion of Record (VoR)
AbstractBlackmail, a wonderfully curious offense, is the favorite of clever criminal law theorists. It criminalizes the threat to do something that would not be criminal if one did it. There exists a rich literature on the issue, with many prominent legal scholars offering their accounts. Each theorist has his own explanation as to why the blackmail offense exists. Most theories seek to justify the position that blackmail is a moral wrong and claim to offer an account that reflects widely shared moral intuitions. But the theories make widely varying assertions about what those shared intuitions are, while also lacking any evidence to support the assertions.

This Article summarizes the results of an empirical study designed to test the competing theories of blackmail to see which best accords with prevailing sentiment. Using a variety of scenarios designed to isolate and test the various criteria different theorists have put forth as “the” key to blackmail, this study reveals which (if any) of the various theories of blackmail proposed to date truly reflects laypeople’s moral judgment.

Blackmail is not only a common subject of scholarly theorizing, but also a common object of criminal prohibition. Every American jurisdiction criminalizes blackmail, although there is considerable variation in its formulation. The Article reviews the American statutes and describes the three general approaches these provisions reflect. The empirical study of lay intuitions also allows an assessment of which of these statutory approaches (if any) captures the community’s views, thereby illuminating the extent to which existing law generates results that resonate with, or deviate from, popular moral sentiment.

The analyses provide an opportunity to critique the existing theories of blackmail and to suggest a refined theory that best expresses lay intuitions. The present project also reveals the substantial conflict between community views and much existing legislation, indicating recommendations for legislative reform. Finally, the Article suggests lessons that such studies and their analyses offer for criminal law and theory.
Persistent URLhttps://doi.org/doi:10.7282/T3DN48HX
SubjectsBlackmail, Extortion, Coercion, Criminal law theory, Social science research, Wrongful intention, Breach of duty, Domination, Usurping authority, Efficient information allocation, State criminal codes, Scenario research
RightsCopyright for scholarly resources published in RUcore is retained by the copyright holder. By virtue of its appearance in this open access medium, you are free to use this resource, with proper attribution, in educational and other non-commercial settings. Other uses, such as reproduction or republication, may require the permission of the copyright holder.