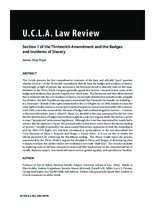 Section 1 of the Thirteenth Amendment and the Badges and Incidents of Slavery (2018)
James G. Pope
U.C.L.A. Law Review 65: 426-486.
Link to published version
VersionVersion of Record (VoR)
AbstractThis Article presents the first comprehensive treatment of the basic and officially “open” question whether Section 1 of the Thirteenth Amendment directly bans the badges and incidents of slavery. Surprisingly, in light of present-day uncertainty, the historical record is relatively clear on this issue. Members of the Thirty-Ninth Congress generally agreed that Section 1 banned at least some of the badges and incidents; they parted company over which ones. The Democrats and their allies, nearly all of whom had opposed the Amendment, claimed that it outlawed only the core incidents of slavery, for example chattelization and physically or legally forced labor. But their Republican opponents, all of whom had supported the Amendment, maintained that it banned a far broader set including—at a minimum—denials of the rights enumerated in the Civil Rights Act of 1866, namely to enjoy the same rights to make contracts, own property, and participate in court as were enjoyed by white citizens. Until 1968, courts also assumed that the issue of badges and incidents hinged on Section 1. Contrary to the received wisdom, Jones v. Alfred H. Mayer Co., decided in that year, announced for the first time that the identification of badges and incidents might be a task for Congress under the Section 2 power to enact “appropriate” enforcement legislation. Although the Court has maintained for nearly half a century that the question is “open,” the practical reality is that courts honor the narrow reading of Section 1 proposed by the unsuccessful Democratic opponents of both the Amendment and the 1866 Civil Rights Act, a reading later introduced to jurisprudence in the now-overruled Jim Crow decisions of Plessy v. Ferguson and Hodges v. United States. It is not too late to resolve the official uncertainty by embracing the Republican reading. This choice would re-start the process, commenced by the Thirty-Ninth Congress but derailed in Plessy and Hodges, of determining what it means to ensure that neither slavery nor involuntary servitude “shall exist.” The Article concludes by exploring some of the basic interpretive issues and their implications for the constitutional law of racially disparate impact, race-based affirmative action, gender equality, and reproductive freedom.
Persistent URLhttps://doi.org/doi:10.7282/T3VD72W4
SubjectsThirteenth Amendment, Badges and incidents of slavery, Disparate treatment, Affirmative action
RightsCopyright for scholarly resources published in RUcore is retained by the copyright holder. By virtue of its appearance in this open access medium, you are free to use this resource, with proper attribution, in educational and other non-commercial settings. Other uses, such as reproduction or republication, may require the permission of the copyright holder.