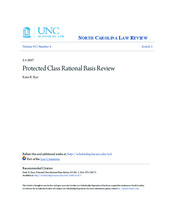 Protected Class Rational Basis Review (2017)
Katie R. Eyer
North Carolina Law Review 95(4): 975-1069.
Link to published version
VersionVersion of Record (VoR)
AbstractIt is commonplace today to associate rational basis review exclusively with groups that are not formally afforded heightened scrutiny under the Supreme Court’s equal protection precedents: groups like gays and lesbians, people with disabilities, and undocumented immigrants. Thus, discussions of the benefits of nurturing a jurisprudence of meaningful rational basis review typically focus exclusively on such “unprotected” groups. In contrast, rational basis review is rarely thought of as providing important protections for groups such as racial minorities and women, who have secured “protected class” status and therefore are subject to regular heightened review of group-burdening classifications. Drawing on extensive original archival research, this Article challenges this common conception. Race and sex discrimination litigators have often historically relied on rational basis arguments as a complement to heightened scrutiny. And during eras when robust rational basis review was prevalent—such as the 1970s—these claims have often succeeded. Today, as a result of, inter alia, the LGBT rights cases (which have expanded judicial conceptions of the scope of rational basis review), we stand at a moment of increased possibility for meaningful rational basis review. Rational basis arguments thus ought to form a part of how we conceptualize the contemporary possibilities for race and gender justice claims. Such an approach has the potential to revitalize what has long been a stalled constitutional jurisprudence around sex and race discrimination. As many scholars have acknowledged, it is extraordinarily rare for courts today to find that a government actor engaged in intentional discrimination against women or racial minorities—the contemporary standard for triggering heightened scrutiny. But as the history unearthed herein demonstrates, courts (especially lower courts) have, at times, been willing to find that racially and gender-impactful laws violate rational basis review. Moreover, such review has often had the capacity to undermine widely shared assumptions regarding the rationality of entrenched structures of race and gender oppression. As such, protected class rational basis review may present one of the few realistic alternatives for reviving a meaningful project of race- and genderbased constitutional change today.
Persistent URLhttps://doi.org/doi:10.7282/T3R49TVV
Subjects14th Amendment, Equal Protection, Rational Basis Review, Race Discrimination, Sex Discrimination, Civil Rights
RightsCopyright for scholarly resources published in RUcore is retained by the copyright holder. By virtue of its appearance in this open access medium, you are free to use this resource, with proper attribution, in educational and other non-commercial settings. Other uses, such as reproduction or republication, may require the permission of the copyright holder.