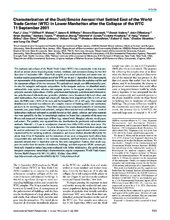 Characterization of the Dust/Smoke Aerosol that Settled East of the World Trade Center (WTC) in Lower Manhattan after the Collapse of the WTC 11 September 2001 (2002)
Paul J. Lioy, Clifford P. Weisel, James R. Millette, Steven Eisenreich, Daniel Vallero, John Offenberg, Barbara Turpin, Robert Porcja
Environmental Health Perspectives 110(7): 703-714.
Link to published version
VersionVersion of Record (VoR)
AbstractThe explosion and collapse of the World Trade Center (WTC) was a catastrophic event that produced an aerosol plume impacting many workers, residents, and commuters during the first few days after 11 September 2001. Three bulk samples of the total settled dust and smoke were collected at weather-protected locations east of the WTC on 16 and 17 September 2001; these samples are representative of the generated material that settled immediately after the explosion and fire and the concurrent collapse of the two structures. We analyzed each sample, not differentiated by particle size, for inorganic and organic composition. In the inorganic analyses, we identified metals, radionuclides, ionic species, asbestos, and inorganic species. In the organic analyses, we identified polycyclic aromatic hydrocarbons (PAHs), polychlorinated biphenyls, polychlorinated dibenzodioxins, polychlorinated dibenzofurans, pesticides, phthalate esters, brominated diphenyl ethers, and other hydrocarbons. Each sample had a basic pH. Asbestos levels ranged from 0.8% to 3.0% of the mass, the PAHs were > 0.1% of the mass, and lead ranged from 101 to 625 µg/g. The content and distribution of material was indicative of a complex mixture of building debris and combustion products in the resulting plume. These three samples were composed primarily of construction materials, soot, paint (leaded and unleaded), and glass fibers (mineral wool and fiberglass). Levels of hydrocarbons indicated unburned or partially burned jet fuel, plastic, cellulose, and other materials that were ignited by the fire. In morphologic analyses we found that a majority of the mass was fibrous and composed of many types of fibers (e.g., mineral wool, fiberglass, asbestos, wood, paper, and cotton). The particles were separated into size classifications by gravimetric and aerodynamic methods. Material < 2.5 µm in aerodynamic diameter was 0.88-1.98% of the total mass. The largest mass concentrations were > 53 µm in diameter. The results obtained from these samples can be used to understand the contact and types of exposures to this unprecedented complex mixture experienced by the surviving residents, commuters, and rescue workers directly affected by the plume from 11 to 12 September and the evaluations of any acute or long-term health effects from resuspendable dust and smoke to the residents, commuters, and local workers, as well as from the materials released after 11 September until the fires were extinguished. Further, these results support the need to have the interior of residences, buildings, and their respective HVAC systems professionally cleaned to reduce long-term residential risks before rehabitation.
Persistent URLhttps://doi.org/doi:10.7282/T3K072NC
SubjectsWorld Trade Center (New York, N.Y.), Aerosols, Inorganic compounds, September 11 Terrorist Attacks, 2001, Smoke plumes, UNITED STATES New York New York (N.Y.)
RightsCopyright for scholarly resources published in RUcore is retained by the copyright holder. By virtue of its appearance in this open access medium, you are free to use this resource, with proper attribution, in educational and other non-commercial settings. Other uses, such as reproduction or republication, may require the permission of the copyright holder.