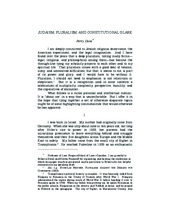 Judiasm, Pluralism, and Constitutional Glare (2015)
Perry Dane
Rutgers Journal of Law and Religion 16(2): 282-293.
Link to published version
VersionVersion of Record (VoR)
AbstractThis short essay is part of a symposium issue titled "People of the Book: Judaism's Influence on American Legal Scholarship." The essay is in part a bit of a spiritual memoir. More important, it tries to tie together various aspects of pluralism and existential encounter that have animated much of my scholarly work. The topics touched on include the question of religion-based exemptions in American constitutional law, the complicated relationship of natural law and positive, law, the debate on same-sex marriage, the problem I call "constitutional glare," and the jurisprudence of Jewish law.
Persistent URLhttps://doi.org/doi:10.7282/T33N26S4
SubjectsReligion and law, Legal pluralism, Religious pluralism, Constitutional theory, Constitutional glare, Religion-based exemptions, Legal imagination, Jewish law, Jewish legal theory, Natural law, Same-sex marriage, Cover, Robert M., Wolf, Arnold Jacob
RightsCopyright for scholarly resources published in RUcore is retained by the copyright holder. By virtue of its appearance in this open access medium, you are free to use this resource, with proper attribution, in educational and other non-commercial settings. Other uses, such as reproduction or republication, may require the permission of the copyright holder.