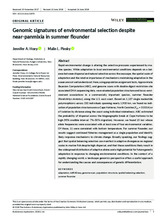 Genomic signatures of environmental selection despite near-panmixia in summer flounder (2018)
Jennifer A. Hoey, Malin L. Pinsky
Evolutionary Applications.
VersionVersion of Record (VoR)
AbstractRapid environmental change is altering the selective pressures experienced by marine species. While adaptation to local environmental conditions depends on a balance between dispersal and natural selection across the seascape, the spatial scale of adaptation and the relative importance of mechanisms maintaining adaptation in the ocean are not well understood. Here, using population assignment tests, Approximate Bayesian Computation (ABC), and genome scans with double-digest restriction-site associated DNA sequencing data, we evaluated population structure and locus--environment associations in a commercially important species, summer flounder (Paralichthys dentatus), along the U.S. east coast. Based on 1,137 single nucleotide polymorphisms across 232 individuals spanning nearly 1,900 km, we found no indication of population structure across Cape Hatteras, North Carolina (FST = 0.0014) or of isolation by distance along the coast using individual relatedness. ABC estimated the probability of dispersal across the biogeographic break at Cape Hatteras to be high (95% credible interval: 7%--50% migration). However, we found 15 loci whose allele frequencies were associated with at least one of four environmental variables. Of those, 11 were correlated with bottom temperature. For summer flounder, our results suggest continued fisheries management as a single population and identify likely response mechanisms to climate change. Broadly speaking, our findings suggest that spatial balancing selection can manifest in adaptive divergence on regional scales in marine fish despite high dispersal, and that these conditions likely result in the widespread distribution of adaptive alleles and a high potential for future genetic adaptation in response to changing environmental conditions. In the context of a rapidly changing world, a landscape genomics perspective offers a useful approach for understanding the causes and consequences of genetic differentiation.
Persistent URLhttps://doi.org/doi:10.7282/T3HD8038
SubjectsAdaptation, ddRADseq, Genome scan, Population structure, Spatial balancing selection, Summer flounder
RightsCopyright for scholarly resources published in RUcore is retained by the copyright holder. By virtue of its appearance in this open access medium, you are free to use this resource, with proper attribution, in educational and other non-commercial settings. Other uses, such as reproduction or republication, may require the permission of the copyright holder.