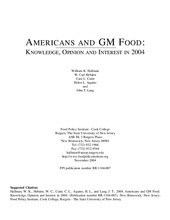 Americans and GM food: Knowledge, opinion and interest in 2004 (2004)
William K. Hallman, W. Carl Hebden, Cara L. Cuite, Helen L. Aquino, John T. Lang
AbstractThis report presents the results from the third in a series of studies examining public perception of genetically modified (GM) food in the United States. All three studies were based on survey results of separate, nationally representative samples of approximately 1,200 Americans taken in 2001, 2003, and 2004. While the survey instrument on which the current report is based maintained many of the same measures of awareness and attitude as its two predecessors, it also included several new queries that assess the ability of respondents to recall specific news stories related to GM food, their interest in the topic, and where they would go to look for new information.

Many questions that were repeated from previous years have changed considerably in the current survey. Some of the classic measures of awareness and opinion now incorporate an "unsure" response as choice supplied by the interviewer. While respondents were allowed to volunteer this response in the past, explicitly providing this option to respondents reduced guessing on knowledge-based questions and encouraged a more accurate representation of opinion than in the past.

The report begins with an investigation of Americans' awareness and knowledge about the topic in general, their ability to recall related news stories, familiarity with laws and regulations as well as other questions designed to get at highly specific knowledge about agricultural biotechnology. Next, it details the effect of the new survey methodology on reported opinions about plant-based and animal-based GM food. Finally, it delves into a number of novel findings about interest in hypothetical television shows about GM food, desire for information on food labels, and reported behavior with regards to information seeking.

Consistent with results from our previous studies and others, these findings suggest that the American public is generally unaware of GM food. Most Americans have heard or read little about it, are not aware of its prevalence in their lives, and are confused as to which type of GM products are available. Respondents struggled with factual questions related to GM food and the science behind it, could not recall news stories related to the topic, and were not very knowledgeable about laws regarding the labeling and testing of GM food.
Americans are also unsure of their opinions about GM food and split in their assessments of the technology when forced to take a position.

Americans say they are interested in the topic of GM food, specifically those topics related to human health. Respondents say they desire more information on food labels and report that they would like to see GM foods labeled as such. The majority of Americans admit they have never looked for information about GM food and most say they will search the Internet should the need arise.
Persistent URLhttps://doi.org/doi:10.7282/T3KW5JFP
Note(Publication number RR-1104-007). New Brunswick, New Jersey: Food Policy Institute, Cook College, Rutgers, The State University of New Jersey
SubjectsGenetic Modification, Genetic Engineering, GM, Food, Labeling, Public Perception, Risk Perception
RightsCopyright for scholarly resources published in RUcore is retained by the copyright holder. By virtue of its appearance in this open access medium, you are free to use this resource, with proper attribution, in educational and other non-commercial settings. Other uses, such as reproduction or republication, may require the permission of the copyright holder.