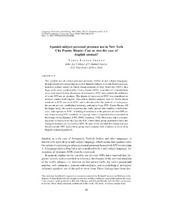 Spanish subject personal pronoun use in New York City Puerto Ricans: Can we rest the case of English contact? (2004)
Nydia Flores-Ferrán
Language Variation and Change 16: 49-73.
Link to published version
VersionVersion of Record (VoR)
AbstractThe variable use of subject personal pronouns (SPPs) on null subject languages, though extensively researched in several Spanish dialects, is for the first time examined in a contact variety of Puerto Rican residents of New York City (NYC). In a large-scale study conducted by Flores-Ferrán (2002), a number of contradictions arose with regard to how the degree of exposure to NYC may mediate the influence of overt SPP use on speakers. The degree of exposure to NYC was considered as indirect contact with English. This article further analyzes how 41 Puerto Rican residents in NYC use overt SPPs, and it also describes the patterns of each group: the recent arrivals, established residents, and native-born NYC Puerto Ricans. Of the larger study, this article examines the verbs’ person and number, switch reference, and exposure to NYC. A striking resemblance in the patterns of overt SPP use was found among NYC residents, as a group, when compared to those reported on the island (Ávila-Jiménez, 1995, 1996; Cameron, 1992). However, when considering years of exposure to the City, the NYC native-born group appeared to have the strongest tendency to use explicit SPPs. In spite of the fact that this distinction was found with the NYC native-born proup, there remains little evidence in favor of an English contact hypothesis.
Persistent URLhttps://doi.org/doi:10.7282/T3BG2MBQ
SubjectsEnglish language--Influence on Spanish, Puerto Ricans--New York (State)--New York--Languages, Spanish language--New York (State)--New York--Pronomials, Spanish language--New York (State)--New York--Pronoun, Sociolinguistics
RightsCopyright for RUcore scholarly resources published in RUcore is retained by the copyright holder. By virtue of its appearance in this open access medium, you are free to use this resource, with proper attribution, in educational and other non-commercial settings. Other uses, such as reproduction or republication, may require the permission of the copyright holder.