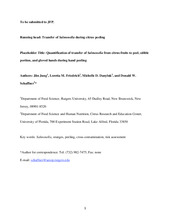 Quantification of transfer of Salmonella from citrus fruits to peel, edible portion, and gloved hands during hand peeling (2017)
Jiin Jung, Loretta M. Friedrich, Michelle D. Danyluk, Donald W. Schaffner
Journal of Food Protection 80(6): 933-939.
Link to published version
VersionAccepted Manuscript (AM)
AbstractAlthough studies have quantified bacterial transfer between hands and various materials, cross-contamination between the surface of fresh citrus fruit and the edible portions during hand peeling has not been reported. This study quantifies transfer of Salmonella to the edible portion of citrus fruit from a contaminated peel during hand peeling. Citrus fruits used for this study were Citrus sinensis (sweet orange) cultivars ‘Valencia’ and ‘Navel’ and C. unshiu (Satsuma mandarins), C. reticulata × C. paradisi (‘Minneola’ tangelo or ‘Honeybell’) and C. paradise (grapefruit) cultivar ‘Marsh'. An avirulent Salmonella Typhimurium LT - 2 (ATCC 700720) resistant to rifampicin was used for all experiments. The inoculum containing ~9 log CFU/ml (50 µl) was spot inoculated onto the equator, stem or styler of each fruit and allowed to dry for 24 h. Six volunteers put on single use latex gloves and peeled inoculated fruit. Peel, edible fruit portion and gloves were collected and enumerated separately. Three replicates of the study were performed where each volunteer peeled 2 inoculated fruit of each variety (n=36 fruit per variety).

Foodborne outbreaks associated with fresh produce have increased worldwide as consumption of fresh produce has also increased (3, 11, 16, 20, 27). While no outbreaks have been directly linked to whole fresh citrus fruit at this time, unpasteurized orange juice has been implicated in several outbreaks caused by Salmonella, Enterotoxigenic E. coli, Shigella, hepatitis A virus, and Norovirus (6, 8, 14, 18). The majority of outbreaks involving fruit and fruit juice have been attributed to pathogens contaminating the outer skin or rind, although the peel or rind of many fruits is discarded by the consumer and not eaten (11, 12, 25).

The FDA Food Safety Modernization Act (FSMA) includes fresh produce safety in its scope and focuses on preventing contamination during the production and harvesting of fresh fruits and vegetables (10). However, fresh produce including fresh citrus fruits can become contaminated at numerous points during transport, distribution, retailing and food preparation in the kitchen environment as well as production and harvesting (5, 16, 23, 27).

Cross-contamination from the surface of fresh produce to edible portions during cutting, slicing, or peeling can occur if the outer skin or rind of fresh produce is contaminated by pathogens (12, 18, 20, 25-27). Bacterial transfer from the skin to the edible flesh has been shown to occur during cutting of tomato and cantaloupes, both of which have implicated as the source of infection in some outbreaks (4, 12, 26). The surface of fresh citrus fruit has also been a source of pathogens, which can be transmitted to the juice during squeezing or peeling. Martinez-Gonzales et al. (17) reported that cross-contamination from inoculated fresh orange skin to utensils used in orange juice squeezing occurred, which subsequently resulted in bacterial transfer from contaminated utensils to squeezed orange juice.

Although studies have been conducted to determine the various factors that influence the bacterial transfer between hands and various surface materials (7, 15, 19), cross-contamination between the surface of fresh citrus fruit and the edible portions during hand peeling has not yet been reported. While a knife or citrus peeler might be used in commercial setting, this study was undertaken to quantify transfer of Salmonella to the edible portion of citrus fruit from a contaminated peel that can occur during hand peeling of a single fruit, as might occur in the home. Transfer rates were determined between various inoculation locations on the citrus fruits to the edible portion and gloved hands.
Persistent URLhttps://doi.org/doi:10.7282/T3KS6TVQ
SubjectsSalmonella, Oranges, Peeling, Cross-contamination, Risk assessment
RightsCopyright for scholarly resources published in RUcore is retained by the copyright holder. By virtue of its appearance in this open access medium, you are free to use this resource, with proper attribution, in educational and other non-commercial settings. Other uses, such as reproduction or republication, may require the permission of the copyright holder.