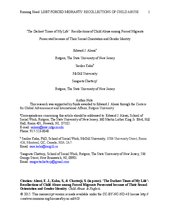 ‘The Darkest Times of My Life’: Recollections of Child Abuse among Forced Migrants Persecuted because of Their Sexual Orientation and Gender Identity (2016)
Edward J. Alessi, Sarilee Kahn, Sangeeta Chatterji
Child Abuse & Neglect 51: Accepted for publication.
Link to published version
VersionAccepted Manuscript (AM)
AbstractNumerous studies demonstrate that lesbian, gay, bisexual, and transgender (LGBT) children and youth are likely to experience abuse by peers, parents, and other adults and that these experiences correlate with a host of mental health problems. However, there is little understanding of the experiences of LGBT children and youth living in countries where social and legal protections for sexual and gender minorities are limited or nonexistent. This qualitative study used thematic analysis to explore the child and adolescent abuse experiences and their impact on the pre-migration mental health of LGBT forced migrants. We analyzed 26 interviews with individuals who obtained refugee or asylee status in the United States or Canada on the basis of sexual orientation or gender identity. Participants originated from countries in Asia, Africa, the Caribbean, Eastern Europe, Latin America, and the Middle East. Analysis revealed the following themes: abuse by parents and caregivers, abuse by peers and school personnel, having nowhere to turn, and dealing with psychological distress. Findings indicate that participants experienced severe verbal, physical, and sexual abuse throughout childhood and adolescence and that this abuse occurred at home, in school, and in the community. Furthermore, there were no resources or sources of protection available to them. Participants linked their abuse to subjective experiences of depression, anxiety, and traumatic stress, as well as suicidal ideation and suicide attempts. We conclude with implications for refugee adjudication practices, mental health care, and international policy.
Persistent URLhttps://doi.org/doi:10.7282/T3NP2695
SubjectsLGBT children, LGBT youth, Sexual minority youth, International child protection, Child abuse, Thematic analysis
RightsCopyright for scholarly resources published in RUcore is retained by the copyright holder. By virtue of its appearance in this open access medium, you are free to use this resource, with proper attribution, in educational and other non-commercial settings. Other uses, such as reproduction or republication, may require the permission of the copyright holder.