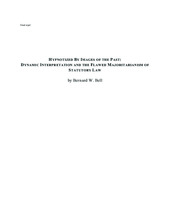 Bell, Bernard W. (2002). Hypnotized by images of the past: dynamic interpretation and the flawed majoritarianism of statutory law. Issues in Legal Scholarship, 2(2) Retrieved from https://doi.org/doi:10.7282/t3-krxs-4e71

Hypnotized by images of the past: dynamic interpretation and the flawed majoritarianism of statutory law (2002)
Bernard W. Bell
Issues in Legal Scholarship 2(2).
Link to published version
VersionAccepted Manuscript (AM)
AbstractThis paper assesses William N. Eskridge, Jr.'s dynamic statutory interpretation approach from the perspective of concerns about non-majoritarian decision-making. In particular, scholars have long expressed concern about the counter-majoritarian difficulty, i.e., non-elected judges invalidating statutes adopted by popularly elected legislatures, inherent in judicial review of statutes for constitutional infirmity. Dynamic statutory interpretation urges courts to abandon their role as "faithful agents" of enacting legislatures, arguing that courts should not merely discern and give effect to the intent of the legislatures, but also interpret statutes in light of changes in societal values that post-date the statute's enactment. Thus Eskridge's dynamic interpretation approach has been criticized as non-majoritarian. The paper notes that while courts are indeed not majoritarian, statutes are often not majoritarian either. First, they may be non-majoritarian because the text of the statute may encompass circumstances that legislators did not envision, or at least did not contemplate. The text of a statute may require a certain result in such circumstances, but that result is not attributable to any conscious decision by a legislative majority. Second, statutes may become non-majoritarian because of their longevity, particularly given the supermajority requirements for legislative action (including action to amend extant statutes) and the temporal constraints on legislative agendas. Thus, statutes may continue in effect after their supporting majorities disappear, or statutes, and the policies underlying them, may gain greater acceptance over time such that the intent of the enacting legislature may become anachronistic and unrepresentative of current majorities. Thus, the paper suggests that even if courts should act as "faithful agents" of the legislature when interpreting statutes, they must still determine to which of the various legislatures that exist over time they owe their allegiance. I suggest that enacting legislature's act of reducing a statute to writing does not entitle the enacting legislature to greater judicial fealty than later-in-time legislatures.

The paper suggests that at least two conventional interpretive techniques make statutory interpretation somewhat dynamic, but at the same time reflect a "faithful agent" theory of interpretation. In particular, while legislatures may leave particular statues, or particular provisions within statutes, unchanged for a long period of time (thus creating the possibility that the statutes have become non-majoritarian), legislatures nevertheless will likely have enacted or modified other statutes during that period of inactivity. Thus, certain techniques for resolving statutory conflicts between older and newer statutes, and the "extending statutes" technique of viewing statutes as creating common-law principles that may be used in construing older statutes, allows courts that adhere to the "faithful agent" theory of interpretation to introduce an element of dynamic statutory interpretation into their construction of statutes.
Persistent URLhttps://doi.org/doi:10.7282/t3-krxs-4e71
RightsCopyright for scholarly resources published in RUcore is retained by the copyright holder. By virtue of its appearance in this open access medium, you are free to use this resource, with proper attribution, in educational and other non-commercial settings. Other uses, such as reproduction or republication, may require the permission of the copyright holder.