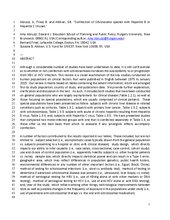 Coinfection of Schistosoma species with Hepatitis B or Hepatitis C Viruses (2016)
Amy Abruzzi, Bernard Fried, Sukaina B. Alikhan
Advances in Parasitology 91, : 111-231.
Link to published version
VersionAccepted Manuscript (AM)
AbstractAlthough a considerable number of studies have been undertaken to date, it is still controversial as to whether or not coinfection with schistosomiasis increases the susceptibility to or progression from HBV or HCV infection. This review is a closer examination of the key studies conducted on human populations on clinical factors that were published in English between 1975 to January 2015. Our review is mainly based on tables containing the salient information, which are arranged first by study population, country of study, and publication date. We provide further explanation, clarification and discussion in the text. As such, it includes both studies that have been conducted on general populations who are largely asymptomatic for clinical disease (Table 1.2.1), as well as those focusing on special populations, which are usually comprised of clinical patients. These special populations have been presented as follow: subjects with chronic liver disease or related conditions such as cirrhosis, Table 1.3.1; subjects with primary liver cancer, Table 1.3.2; subjects with schistosomiasis, Table 1.3.3; subjects with acute or chronic hepatitis resulting from Hepatitis B virus, Table 1.3.4; and, subjects with Hepatitis C virus, Table 1.3.5. We have presented studies that compared two mono-infected groups with one that is coinfected separately in Table 1.4, as these offer us the best basis from which to evaluate if any synergistic effects accompany coinfection.

A number of factors contributed to the results reported in our tables. These included, but are not limited to: subject selection (i.e., asymptomatic cases typically drawn from the general population vs. subjects presenting to a hospital or clinic with clinical disease); study design, which directly impacts our ability to infer causality (i.e., case series, cross-sectional, case control, cohort study); use and choice of control population (i.e., apparently healthy subjects vs. other hospital patients vs. none); sample size, which directly impacts statistical power and can result in a Type II error; geographic area, which may reflect differences in population genetics, public health history, environmental differences or any number of other important factors (i.e., Egypt, Brazil, China); method of testing for schistosomal infections (i.e., stool vs. antibody test); method of testing to determine if advanced schistosomal disease was present (i.e., ultrasound, liver biopsy vs. none); method of serological testing for HBV (i.e., use of HBsAg alone or with other markers or DNA testing); method of serological testing for HCV (i.e., use of anti-HCV alone or with RNA testing); and, year of the study, which reflects among other things, technological improvements between tests as well as possible changes in the frequency of exposure in the populations under study (i.e., use of parenteral anti-schistosomal therapy vs. the oral anti-schistosomal medication).

Despite all these differences, throughout this review we have observed general patterns that seem largely consistent with one another. Studies conducted on general, largely asymptomatic populations tend to support the view that having one of the diseases in question (i.e., schistosomiasis does not necessarily predispose one to becoming coinfected with another (i.e., HBV or HCV). Rather, the probability of becoming coinfected seems most closely associated with modes of transmission for either HBV or HCV in schistosome-endemic areas, such as the past use of parenteral anti-schistosomal therapy or frequent blood transfusion. Once coinfected, however, the clinical course of illness for those with Schistosoma-HBV or Schistosoma-HCV infections are typically much more severe than for mono-infected subjects. The strongest evidence for this was found in the half-dozen or so prospective cohort studies that systematically monitored disease progression in their subjects. With respect to HBV infection, coinfection with Schistosoma prolonged the carriage state and more often resulted in chronic hepatitis with greater cirrhosis as well as higher mortality. Much of the same was also observed with respect to HCV, where coinfection with Schistosoma was associated with a reduced ability to spontaneously resolve the viral infection and more often resulted in rapid fibrosis as well as higher mortality. Furthermore, two of these studies which were fully comparative in nature, support the supposition that there is a synergistic association between Schistosoma-HCV for both liver fibrosis and mortality. Immunological studies, all conducted on HCV, also generally seem to support this.

The results of our research argue for greater primary prevention for both HBV and HCV in Schistosoma-endemic populations. Although no vaccine currently exists for HCV as it does for HBV, additional steps can still be taken to reduce transmission in high risk populations. Greater use of the HBV vaccine is particularly advisable. Finally, additional observational, longitudinal studies conducted on human populations that are fully comparative in nature could help answer some of the remaining questions on both Schistosoma-HBV as well as Schistosoma-HCV coinfections. Some of these include the role of active vs. past schistosomal infections, the role of genetic variants, as well as the effect of coinfection on treatment. Future studies should make a particular effort to use a sufficient sample size to ensure adequate statistical power, which was not often properly considered in many of the studies we reviewed for this paper.
Persistent URLhttps://doi.org/doi:10.7282/T31C200Z
SubjectsSchistosomiasis, Hepatitis B virus, Hepatitis C virus, Coinfection, Disease progression, Chronic hepatitis, Liver--Diseases, Schistosoma japonicum, Schistosoma haematobium
RightsCopyright for scholarly resources published in RUcore is retained by the copyright holder. By virtue of its appearance in this open access medium, you are free to use this resource, with proper attribution, in educational and other non-commercial settings. Other uses, such as reproduction or republication, may require the permission of the copyright holder.