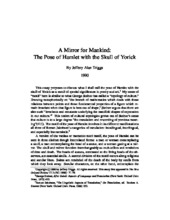 A Mirror for Mankind: The Pose of Hamlet with the Skull of Yorick (1990)
Jeffery A. Triggs
New Orleans Review 17(3): 71-79.
VersionAccepted Manuscript (AM)
AbstractThis essay proposes to discuss what I shall call the pose of Hamlet with the skull of Yorick as a motif of special significance in poetry and art. My sense of “motif” here is similar to what George Steiner has called a “topology of culture.” Drawing metaphorically on “the branch of mathematics which deals with those relations between points and those fundamental properties of a figure which re- main invariant when that figure is bent out of shape,” Steiner argues that there are also such “invariants and constants underlying the manifold shapes of expression in our culture.” This notion of cultural topologies grows out of Steiner’s sense that culture is to a large degree “the translation and rewording of previous mean- ing”(415). The motif of the pose of Hamlet involves in its different manifestations all three of Roman Jakobson’s categories of translation: intralingual, interlingual, and especially intersemiotic.
Persistent URLhttps://doi.org/doi:10.7282/T3TB18PN
SubjectsVanitas (Art), Symbolism, Translation, Shakespeare, William, 1564-1616. Hamlet, Dekker, Thomas, approximately 1572-1632, Cavarozzi, Bartolomeo, approximately 1590-1625, Ribera, Jusepe de, 1591-1652, La Tour, Georges du Mesnil de, 1593-1652, Titian, approximately 1488-1576, Rembrandt Harmenszoon van Rijn, 1606-1669, Picasso, Pablo, 1881-1973, Eliot, T. S. (Thomas Stearns), 1888-1965, Seferis, George, 1900-1971, Strauss, Richard, 1864-1949, Hofmannsthal, Hugo von, 1874-1929
RightsCopyright for scholarly resources published in RUcore is retained by the copyright holder. By virtue of its appearance in this open access medium, you are free to use this resource, with proper attribution, in educational and other non-commercial settings. Other uses, such as reproduction or republication, may require the permission of the copyright holder.