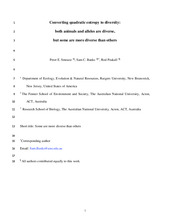 Converting quadratic entropy to diversity: both animals and alleles are diverse, but some are more diverse than others (2017)
Peter E. Smouse, Sam C. Banks, Rod Peakall
PLOS ONE 12(10): e0185499.
Link to published version
VersionAccepted Manuscript (AM)
AbstractThe use of diversity metrics has a long history in population ecology, while population genetic work has been dominated by variance-derived metrics instead, a technical gap that has slowed cross-communication between the fields. Interestingly, Rao’s Quadratic Entropy (RQE), comparing elements for ‘degrees of divergence’, was originally developed for population ecology, but has recently been deployed for evolutionary studies. We here translate RQE into a continuous diversity analogue, and then construct a multiply nested diversity partition for alleles, individuals, populations, and species, each component of which exhibits the behavior of proper diversity metrics, and then translate these components into [0,1] - scaled form. We also deploy non-parametric statistical tests of the among-stratum components and novel tests of the homogeneity of within-stratum diversity components at any hierarchical level. We then illustrate this new analysis with eight nSSR loci and a pair of close Australian marsupial (Antechinus) congeners, using both ‘different is different’ and ‘degree of difference’ distance metrics. The total diversity in the collection is larger than that within either species, but most of the within-species diversity is resident within single populations. The combined A. agilis collection exhibits more diversity than does the combined A. stuartii collection, possibly attributable to localized differences in either local ecological disturbance regimes or differential levels of population isolation. Beyond exhibiting different allelic compositions, the two congeners are becoming more divergent for the arrays of allele sizes they possess.
Persistent URLhttps://doi.org/doi:10.7282/T3319ZW1
NoteThe Antechinus data are archived in Excel workbook form, along with listings of the QDIVER results extracted from GenAlEx6.51 (http://biology.anu.edu.au/GenAlEx/). DC data and analyses are presented in S5 Appendix, and DR data and analyses are presented in S6 Appendix; these latter are ANU's to enable, and will be available with the paper as PLOS ONE access Supplements.
SubjectsRao’s quadratic entropy, Amova, Permanova, Gamova, Hill numbers, Phylogenetic diversity, Scaled diversity, Antechinus
RightsCopyright for scholarly resources published in RUcore is retained by the copyright holder. By virtue of its appearance in this open access medium, you are free to use this resource, with proper attribution, in educational and other non-commercial settings. Other uses, such as reproduction or republication, may require the permission of the copyright holder.