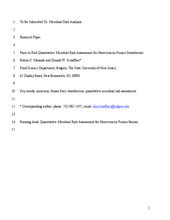 Farm to Fork Quantitative Microbial Risk Assessment for Norovirus on Frozen Strawberries (2018)
Robyn C. Miranda, Donald W. Schaffner
Microbial Risk Analysis.
Link to published version
VersionAccepted Manuscript (AM)
AbstractFoodborne illness outbreaks have been increasingly linked to the consumption of fresh and frozen berries that were contaminated with pathogenic viruses, such as human norovirus (NoV). Contamination of berries is assumed to take place at harvest by the use of contaminated water for pesticide dilution, irrigation water source or by shedding berry pickers in the field. A quantitative microbial risk assessment simulation model was built to replicate the largest known NoV outbreak which sickened about 11,000 people over a 3-week period. The outbreak occurred in Germany in 2012 when contaminated frozen strawberries were served at nearly 400 schools and daycare centers. The risk model explicitly assumed that all contamination would arise from NoV contamination of surface water used for pesticide dilution. Input data was collected from the published literature, observational studies and assumptions. The model starts with contamination of the berries in the field, and proceeds through transportation to processing facility, washing, sanitizing, freezing, frozen transport to cargo ship, transport view of cargo ship, transport to distribution center, frozen storage at the distribution center, transport to the catering facility, food service preparation and consumption, dose response, and predicted illnesses. A total of 21 scenarios were chosen to evaluate the impact of model parameters on the number of illness associated with NoV contamination of berries. Scenarios evaluated include the initial level of NoV in surface water, the effect of seasonality on the prevalence of NoV in surface water, the strength of the pesticide used, the volume of water used to dilute the pesticide, temperature during transportation to processing facility, washing and sanitizing conditions at processing facility and preparation (heat-treatment) of berries prior to consumption. Scenarios were compared via the Factor Sensitivity technique where the logarithm of the ratio of mean illnesses was used to compare different assumptions. The input that had the greatest effect on increasing in the number of illnesses was a high NoV concentration in the water (8 log Genome Copies/L) when compared to the baseline scenario with resulting mean illnesses of 7,964 illnesses and ~2 illnesses, respectively. This assumption about the concentration of virus in the pesticide makeup water was the only variable capable of producing an outbreak similar to that observed in Germany in 2012. Heat-treatment of the berries, use of a pesticide with strong antiviral effect, and assumption about the virus concentration in the pesticide make-up water had the largest impact on decreasing illnesses.
Persistent URLhttps://doi.org/doi:10.7282/T3Z60SDR
SubjectsNorovirus, Frozen fruit, Strawberries, Quantitative microbial risk assessment
RightsCopyright for scholarly resources published in RUcore is retained by the copyright holder. By virtue of its appearance in this open access medium, you are free to use this resource, with proper attribution, in educational and other non-commercial settings. Other uses, such as reproduction or republication, may require the permission of the copyright holder.