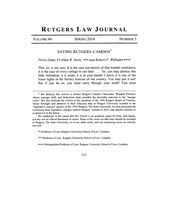 Saving Rutgers Camden (2014)
Perry Dane, Allan R. Stein, Robert F. Williams
Rutgers Law Journal 44(3): 337-412.
VersionVersion of Record (VoR)
AbstractIn January 2012, Chris Christie, Governor of New Jersey, announced that the Camden campus of Rutgers, the State University, was to be severed from Rutgers and taken over by Rowan University. Every major political force in the state, Democratic and Republican, elected and behind the scenes, lined up in support of the plan. Nevertheless, Rutgers-Camden faculty, students, administrators, alumni, and trustees, and their allies, vigorously fought the plan, convinced that it made no sense and would be devastating to the campus and higher education in the State more generally. The campaign opposing the merger with Rowan was popular and political, but it ultimately depended on powerful legal arguments grounded in Rutgers’ distinct and complex history. By the end of June, the merger idea had been defeated. As one assistant professor put it, “The bad guys got outmaneuvered by a bunch of nerds.”

This article is a scholarly effort by three faculty participants to make sense of the struggle to save Rutgers-Camden and put it in theoretical context. The article narrates the story of the fight over the proposed merger and carefully analyzes the legal constraints on the plan. It also links the story to important broader questions about legal pluralism, the public/private divide, the relationship between state universities and state governments, and competing visions of the modern university faculty. Through this combination of case study, legal argument, and conceptual inquiry, the article provides a cautionary but hopeful tale about the importance of academic communities defending sound public policy and their own historical rights to self determination against the machinations that can infect our political culture and legislative process.
Persistent URLhttps://doi.org/doi:10.7282/T3JW8J88
SubjectsRutgers, Legislation, Legislative process, Higher education, Public universities, State constitutional law, Contract Clause, Academic institutional autonomy, Legal pluralism, Public/private divide, Faculty unions, New Jersey politics
RightsCopyright for scholarly resources published in RUcore is retained by the copyright holder. By virtue of its appearance in this open access medium, you are free to use this resource, with proper attribution, in educational and other non-commercial settings. Other uses, such as reproduction or republication, may require the permission of the copyright holder.