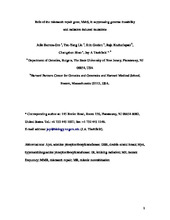 Role of the mismatch repair gene, Msh6, in suppressing genome instability (2008)
Julio Barrera-Oro, Tzu-Yang Liu, Erin Gorden, Raju Kucherlapati, Changshun Shao, Jay A. Tischfield
Mutations Research 642(1/2): 74-79.
Link to published version
VersionAccepted Manuscript (AM)
AbstractMismatch repair (MMR) is critical for preserving genomic integrity. Failure of this system can accelerate somatic mutation and increase the risk of developing cancer. MSH6, in complex with MSH2, is the MMR protein that mediates DNA repair through the recognition of 1- and 2-bp mismatches. To evaluate the effects of MSH6 deficiency on genomic stability we compared the frequency of in vivo loss of heterozygosity (LOH) between MSH6-proficient and deficient, 129S2 x C57BL/6 F1 hybrid mice that were heterozygous for our reporter gene Aprt. We recovered mutant cells that had functionally lost APRT protein activity and categorized the spectrum of mutations responsible for the LOH events. We also measured the mutant frequency at the X-linked gene, Hprt, as a second reporter for point mutation. In Msh6-/-Aprt+/- mice, mutation frequency at Aprt was elevated in both T cells and fibroblasts by 2.5-fold and 5.7-fold, respectively, over Msh6+/+Aprt+/- littermate controls. While a modest increase in mitotic recombination (MR) was observed in MSH6-deficient fibroblasts compared to wild type controls, point mutation was the predominant mechanism leading to APRT deficiency in both cell types. Base substitution, consisting of multiple types of transitions, accounted for all of the point mutations identified within the Aprt coding region. We also assessed the role of MSH6 in preventing mutations caused by a common environmental mutagen, ionizing radiation (IR). In Msh6-/-Aprt+/- mice, 4 Gy of X-irradiation induced a significant increase in point mutations at both Aprt and Hprt in T cells, but not in fibroblasts. These findings indicate that MutSα reduces spontaneous and IR-induced mutation in a cell-type dependant manner.
Persistent URLhttps://doi.org/doi:10.7282/T3MG7MVT
SubjectsDNA repair, Genome dynamics and stability, Genetic recombination, Loss of heterozygosity, Mismatch repair, MSH6, Mitotic recombination, Aprt, MutSα
RightsCopyright for scholarly resources published in RUcore is retained by the copyright holder. By virtue of its appearance in this open access medium, you are free to use this resource, with proper attribution, in educational and other non-commercial settings. Other uses, such as reproduction or republication, may require the permission of the copyright holder.