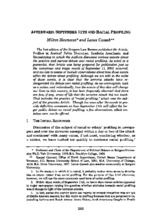 Afterward: September 11th and Racial Profiling (2001)
Milton Heumann, Lance Cassak
Rutgers Law Review 54(1): 283-291.
VersionVersion of Record (VoR)
AbstractThe last edition of the Rutgers Law Review published the Article, Profiles in Justice? Police Discretion, Symbolic Assailants, and Stereotyping in which the Authors discussed various aspects about the practice and current debate over racial profiling. As noted in a postscript, that Article was being prepared for publication just as the monstrous and tragic events of September 11, 2001 occurred, and too late to assess or include observations about how those events affect the debate about profiling. Although we are still in the wake of those events, it is clear that the terrorist attacks have reinvigorated the debate over racial profiling. As we contemplate, both as a nation and individually, how the events of that day will change our lives in this country, it has been frequently observed that there are few, if any, areas of life that the terrorist attack did not touch. That includes the practice of "racial profiling," which was the subject of the previous Article. Though too soon after the events to provide definitive comments on how September 11th will affect the larger public debate on racial profiling, a few observations, albeit tentative ones, can be offered.
Persistent URLhttps://doi.org/doi:10.7282/T3PV6HR8
SubjectsSeptember 11 terrorist attacks, 2001, Arab-Americans, Muslims, Racial profiling, North America, New Jersey
RightsCopyright for scholarly resources published in RUcore is retained by the copyright holder. By virtue of its appearance in this open access medium, you are free to use this resource, with proper attribution, in educational and other non-commercial settings. Other uses, such as reproduction or republication, may require the permission of the copyright holder.