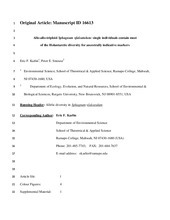 Allo-triploid Sphagnum xfalcatulum: single individuals contain most of the Holantarctic diversity for ancestrally indicative markers (2017)
Erik F. Karlin, Peter E. Smouse
Annals of Botany 120(2): 221-231.
Link to published version
VersionAccepted Manuscript (AM)
AbstractBackground and Aims. Allopolyploids exhibit both different levels and patterns of genetic variation than are typical of diploids. However, scant attention has been given to the partitioning of allelic information and diversity in allopolyploids, particularly that among homeologous monoploid components of the hologenome. Sphagnum ×falcatulum is a double allopolyploid peat moss that spans a considerable portion of the Holantarctic. With monoploid genomes from three ancestral species, this organism exhibits a complex evolutionary history involving serial inter-subgeneric allopolyploidizations.

Methods. Studying populations from three disjunct regions (South Island [New Zealand]; Tierra de Fuego archipelago [Chile, Argentia]; Tasmania [Australia]) we examine genetic information for five highly stable microsatellite markers that differ among the three (ancestral) monoploid genomes. We partition the holoploid information into separate components for individuals within and among single sites and regions, as well as within and among the three monoploid genomes, and then convert those information components into corresponding diversity measures.

Key Results. The majority (76%) of alleles detected across these five markers appear to have been captured by hybridization, but the information within each of the three monoploid genomes varied, suggesting a history of recurrent alloploidization between ancestral species containing different levels of genetic diversity. Information within individuals, equivalent to the information among monoploid genomes (for this dataset), was relatively stable, and represented 83% of the grand total information across the Holantarctic, with both inter-regional and inter-population diversification each accounting for about 5% of the total information.

Conclusions. Sphagnum ×falcatulum appears to have inherited the great majority of its genetic diversity at these markers by reticulation, rather than by subsequent evolutionary radiation. However, some post hybridization genetic diversification has become fixed in at least one regional population. Methodology allowing statistical analysis of any ploidy level is presented.
Persistent URLhttps://doi.org/doi:10.7282/T3FX7CRH
SubjectsAllelic information, Allelic diversity, Allopolyploid, Bryophytes, Hologenome, Populations, Reticulation, Shannon partitioning, Sphagnum, Sphagnum ×falcatulum
RightsCopyright for scholarly resources published in RUcore is retained by the copyright holder. By virtue of its appearance in this open access medium, you are free to use this resource, with proper attribution, in educational and other non-commercial settings. Other uses, such as reproduction or republication, may require the permission of the copyright holder.