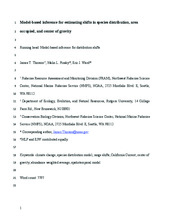 Model-based inference for estimating shifts in species distribution, area occupied and centre of gravity (2016)
James T. Thorson, Malin L. Pinsky, Eric J. Ward
Methods in Ecology and Evolution 7(8): 990-1002.
Link to published version
VersionAccepted Manuscript (AM)
Abstract1. Changing climate is already impacting the spatial distribution of many taxa, including bees, plants, birds, butterﬂies and ﬁshes. A common goal is to detect range shifts in response to climate change, including changes in the centre of the population’s distribution (the centre of gravity, COG), population boundaries and area occupied. Conventional estimators, such as the abundance-weighted average (AWA) estimator for COG, confound range shifts with changes in the spatial distribution of available survey data and may be biased when the distribution of survey data shifts over time. AWA also does not estimate the standard error of COG in individual years and cannot incorporate data from multiple survey designs.

2. To explicitly account for changes in the spatial distribution of survey eﬀort, we propose an alternative species distribution function (SDF) estimator. The SDF approach involves calculating distribution metrics, including COG, population boundary and area occupied, directly from the predicted species distribution or density function. We illustrate the SDF approach using a spatio-temporal model that is available as an R package. Using simulated data, we conﬁrm that the SDF substantially decreases bias in COG estimates relative to the AWA estimator. We then illustrate the method by analysing data from two data sets spanning 1977–2013 for 18 marine ﬁshes along the U.S. West Coast.

3. In our case study, the SDF estimator shows signiﬁcant northward shifts for six of 18 species (with southward shifts for only 2), where two species (darkblotched and greenstriped rockﬁshes) have both a northward shift and a decreased area occupied. Pelagic species (e.g. Paciﬁc hake and spiny dogﬁsh) have more variable distribution than bottom-associated species. We also ﬁnd substantial diﬀerences between AWA and SDF estimates of COG that are likely caused by shifts in sampling distribution (which aﬀect the AWA but not the SDF estimator).

4. We caution that common estimators for range shift can yield inappropriate inference whenever sampling designs have shifted over time. We conclude by suggesting further improvements in model-based approaches to analysing climate impacts, including methods addressing the impact of local and regional temperature changes on species distribution.
Persistent URLhttps://doi.org/doi:10.7282/T31V5HSF
SubjectsAbundance-weighted average, California Current, Centre of gravity, Climate change, Range shifts, Spatiotemporal model, Species distribution model, Center of gravity
RightsCopyright for scholarly resources published in RUcore is retained by the copyright holder. By virtue of its appearance in this open access medium, you are free to use this resource, with proper attribution, in educational and other non-commercial settings. Other uses, such as reproduction or republication, may require the permission of the copyright holder.