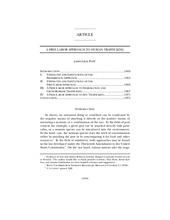 A Free Labor Approach to Human Trafficking (2010)
James G. Pope
University of Pennsylvania Law Review 158: 1849-1875.
VersionVersion of Record (VoR)
AbstractIn theory, an unwanted thing or condition can be eradicated by the negative means of attacking it directly or the positive means of nurturing a nemesis, or a combination of the two. In the field of pest control, for example, a given pest can be attacked directly with pesticides, or a nemesis species can be introduced into the environment. In the latter case, the nemesis species does the work of extermination either by attacking the pest or by outcompeting it for food and other resources. Direct attack is the predominant legal approach to human trafficking (which is defined to include not only cross-border trafficking, but also the harboring or maintenance of a person in a condition of slavery or involuntary servitude). The United Nations Protocol, for example, calls on member states to criminalize “trafficking in persons” and to provide protection and assistance to victims of that practice. There is, however, another possibility: nurturing the free labor system as a nemesis to trafficking. This approach operates by guaranteeing to workers a set of rights sufficient to achieve either economic independence or, failing that, the power below to give employers the incentive above to provide jobs that rise above servitude. It relies primarily on workers – not government enforcement – to achieve and sustain labor freedom. This free labor approach, which finds support in the law of “involuntary servitude” under the Thirteenth Amendment to the United States Constitution, appears to provide an indispensable and cost-effective way to eliminate instances of trafficking that elude criminal prosecution. The article discusses the possible application of this approach to slavery and involuntary servitude, cross-border trafficking, and sex trafficking.
Persistent URLhttps://doi.org/doi:10.7282/T31Z47VP
SubjectsTrafficking, Slavery, Involuntary servitude, Sex work, Modern slavery, Thirteenth Amendment
RightsCopyright for scholarly resources published in RUcore is retained by the copyright holder. By virtue of its appearance in this open access medium, you are free to use this resource, with proper attribution, in educational and other non-commercial settings. Other uses, such as reproduction or republication, may require the permission of the copyright holder.