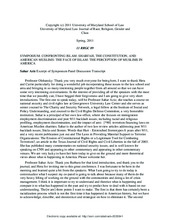 The Face of Islam: the Perception of Muslims in America (2011)
Sahar F. Aziz
University of Maryland Journal of Race, Religion, Gender, and Class 11(1): 89-96.
Link to published version
VersionAccepted Manuscript (AM)
AbstractThis speech contextualizes the racialization of Arabs, Muslims, and South Asians in the post-9/11 era. It is important to try to understand and theorize what is happening and compare it to what has happened in the past and try to predict how to deal with it based on our understanding. The[re are] three points I want to make. The first is that there has certainly been a racialization process which is not the first time it has happened in American history, but we have to acknowledge, describe, and deconstruct and strategize on how to eliminate it. The second point I want to make is that government action is legitimizing this racialization and it is essentially legitimizing private bias in various context. I will talk a little about employment bias, which my recent paper is about. And third, I think there has been a politicization of counterterrorism such that it is creating a coercive assimilation of these groups, and I want to go into more detail as to how that is happening and some of the troubling consequences that I think all of us should be concerned about because I think it is going to affect all Americans. First, what is this racialization process? First what is the stereotype? It is the terrorist Other; that's the stereotype. So Islam, in my opinion, not just Arabs, Muslims and South Asians anymore, is racialized as terrorist. I used to think it was just these three groups. I think it is Islam that has been raced as terrorism, so anything affiliated with [*91] Islam, whether you are perceived through your profession, faith, the way you look, that you are now raced as a terrorist, and the color of your skin doesn't matter. If you've read any critical race theory or this process of racialization that is happening in America where for example Catholics were raced as non-white and inferior; Japanese were raced as disloyal, suspicious, treasonous; African Americans are raced as criminals, violent, gangsters; Latinos are raced as undocumented, illegal, inassimilable, etc. There [are] a lot of various groups that are raced in a pejorative sense and unfortunately it seems to be a tradition that we have in this country, but I think with every generation we can try to stop that historical trend.
Persistent URLhttps://doi.org/doi:10.7282/T3CJ8J2K
RightsCopyright for scholarly resources published in RUcore is retained by the copyright holder. By virtue of its appearance in this open access medium, you are free to use this resource, with proper attribution, in educational and other non-commercial settings. Other uses, such as reproduction or republication, may require the permission of the copyright holder.