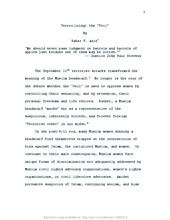 Terror(izing) the "Veil" (2014)
Sahar F. Aziz
The Rule of Law and the Rule of God: 207-232.
Link to published version
VersionVersion of Record (VoR)
AbstractThe September 11th terrorist attacks transformed the meaning of the Muslim headscarf. No longer is the crux of the debate whether the “veil” is used to oppress women by controlling their sexuality, and by extension, their personal freedoms and life choices. Rather, a Muslim headscarf “marks” her as a representative of the suspicious, inherently violent, and forever foreign “Terrorist other” in our midst.

In the post-9/11 era, Muslim women donning a headscarf find themselves trapped at the intersection of bias against Islam, the racialized Muslim, and women. In contrast to their male counterparts, Muslim women face unique forms of discrimination not adequately addressed by Muslim civil rights advocacy organizations, women’s rights organizations, or civil liberties advocates. Amidst pervasive suspicion of Islam, continuing sexism, and bias against her particular race group, the Muslim woman is both a visible target and a silent victim.

Whether guilty by association through her marriage to a presumably terrorist husband, or an active accomplice in secret plots to terrorize Americans, the covered Muslim woman is rarely perceived as an individual capable of developing her own beliefs and protestations. Instead, she is a mere extension of her familial relationships with actual or prospective male terrorists. As national security prerogatives filter perceptions of Muslims through the prism of terrorism, the Muslim “veil” has become a symbol of terror. This critical shift results in palpable adverse consequences to a Muslim woman’s freedom of religion, freedom of individual expression, and safety interests.

The shift in meaning of the Muslim headscarf is due in large part to a recasting of Islam as a political ideology as opposed to a religion. Once this definitional shift occurs, acts that would otherwise qualify as actionable religious discrimination are accepted as legitimate, facially neutral national security law enforcement measures or protected political activity by private actors. The recasting serves as the basis for calls to deny Muslims of rights otherwise protected under the law. The shift in symbolism of the headscarf results in two notable outcomes. First and foremost, Muslim women continue to be objectified within a larger conflict of ideas between predominantly male decision makers. Heated national security debates about the emergence of “homegrown terrorism,” now code for domestic Muslim terrorists, focus primarily on persecuting or defending male suspects. Sparse attention is paid to the impact of the post-9/11 national security era on Muslim women, and specifically those that wear the headscarf. Irrespective of their place of origin or the color of their skin, the headscarf “marks” Muslim women as sympathetic to the enemy, presumptively disloyal to this country, and forever foreign.

Second, any meaningful discourse surrounding a woman’s right to wear a headscarf in America cannot be disconnected from the racial subtext of the “Terrorist other” associated with the Muslim headscarf. Thus the label “Muslim” is both a religious and racial identifier. The shift in symbolism of the “veil” from subjugation to terrorism causes palpable discrimination against Muslim women. She now must worry about her and her families’ physical safety, her ability to obtain employment, and the government’s harsh prosecutorial tactics. That is in addition to the deprivation of her individual expressive and religious freedom rights.

Accordingly, this essay examines the implications of the shift in symbolism interpretation of the Muslim head scarf in America from gender subjugation to terror(ism). Specifically, this essay argues that the Muslim woman is a casualty of the post-9/11 “war on terror” in ways different than Muslim men. She is trapped in the crosshairs of national security conflicts that profoundly affect her life but have yet to be adequately addressed by advocacy groups focused solely on defending Muslims, women’s rights, or civil liberties post-9/11.
Persistent URLhttps://doi.org/doi:10.7282/T34171MT
SubjectsWomen's rights, Gender, Muslim, Muslim women, Post-9/11, Post 9-11, 9/11, 9-11, Civil rights, Discrimination, Intersectionality, National security, Islam
RightsCopyright for scholarly resources published in RUcore is retained by the copyright holder. By virtue of its appearance in this open access medium, you are free to use this resource, with proper attribution, in educational and other non-commercial settings. Other uses, such as reproduction or republication, may require the permission of the copyright holder.