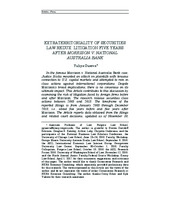 Extraterritoriality of Securities Law Redux: Litigation Five Years After Morrison v. National Australia Bank (2017)
Yuliya Guseva
Columbia Business Law Review 1: 199-279.
Link to published version
VersionVersion of Record (VoR)
AbstractIn the famous Morrison v. National Australia Bank case, Justice Scalia mounted an attack on plaintiffs with tenuous connection to U.S. capital markets and attempted to rein in class actions against international corporations. Despite Morrison’s broad implications, there is no consensus on its ultimate impact. This Article contributes to this discussion by examining the risk of litigation faced by foreign firms before and after Morrison. The research reviews securities class actions between 2005 and 2015. The timeframe of the reported filings is from January 2005 through December 2015, i.e., about five years before and five years after Morrison. The Article reports data obtained from the filings and related court decisions, updated as of November 30, Extraterritoriality of Securities Law Redux: Litigation Five Years After Morrison v. National Australia Bank 2016. The Article concludes that, first, the actual risk of litigation has become more ascertainable and slightly lower than before Morrison. Second, Morrison affected the composition of the plaintiffs’ class. Based on mean and median settlement values, Morrison may be associated with lower litigation costs. Third, the results suggest that when firms select a cross-listing mode (i.e., an exchange listing or OTC trading), they effectively choose their level of commitment to U.S. markets through not only the ex-ante known reporting costs, but also projected litigation costs. Fourth, the research reviews the timing of settlements and dismissals vis-à-vis the types of cross-listing programs. Although more research is needed in this area, Morrison may have enabled foreign firms to rule out inflated assessments of the risk of litigation and to more precisely determine the expected value of their cross-listing programs net of litigation.
Persistent URLhttps://doi.org/doi:10.7282/T3KD22J8
SubjectsSecurities litigation, Morrison v. National Australia Bank, Foreign issuers, Class actions, Cross-listings, Extraterritoriality, 10b-5
RightsCopyright for scholarly resources published in RUcore is retained by the copyright holder. By virtue of its appearance in this open access medium, you are free to use this resource, with proper attribution, in educational and other non-commercial settings. Other uses, such as reproduction or republication, may require the permission of the copyright holder.