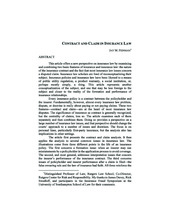 Contract and claim in insurance law (2018)
Jay M. Feinman
Connecticut Insurance Law Journal 25(1): 159-196.
Link to published version
VersionVersion of Record (VoR)
AbstractThis article offers a new perspective on insurance law by examining and combining two basic features of insurance and insurance law: the nature of the insurance contract and the fact that most insurance law issues concern a disputed claim. Insurance law scholars are fond of reconceptualizing their subject. Insurance policies and insurance law have been likened to a means of public utility regulation, a product warranty, a social institution, or, perhaps mostly simply, a thing. This article represents another conceptualization of the subject, and one that may be less foreign to the subject and closer to the reality of the formation and performance of insurance relationships.
Every insurance policy is a contract between the policyholder and the insurer. Fundamentally, however, almost every insurance law problem, dispute, or doctrine is really about paying or not paying claims. These two features—contract and claim—are at the heart of most insurance law disputes. The significance of insurance as contract is generally recognized, but the centrality of claims, less so. The article examines each of them separately and then combines them. Doing so provides a perspective on a large number of insurance law issues, and that perspective should change the courts’ approach to a number of issues and doctrines. The focus is on personal lines, particularly first-party insurance, but the analysis also has implications in other settings.
The article first presents the contract and claim analysis. It then applies the analysis to several common issues in insurance law. The illustrations come from three different points in the life of an insurance policy. The first concerns a formation issue: when an insurer may use misstatements by a policyholder in the application process to avoid coverage. The second, and most general, addresses interpretation issues that concern the insurer’s performance of the insurance contract. The third concerns issues of policyholder and insurer performance after a claim is filed—the false swearing rule and the law of insurance bad faith. All three reinforce the insight that every doctrinal issue involves a conception of the insurance contract and arises because of a disputed claim. The discussion demonstrates that courts sometimes use similar analysis, describes those tendencies, suggests why they are incomplete, and uses the contract and claim analysis to make them explicit and more comprehensive. Other courts take quite different approaches; contrasting those approaches with the contract and claim analysis demonstrates what they get wrong. The result is both a demonstration of the usefulness of the article’s analysis and a beginning catalog of how it can reshape insurance law doctrine.
Persistent URLhttps://doi.org/doi:10.7282/t3-1f4j-8828
SubjectsInsurance, Insurance law, Contract law, Relational contract, Warranty, Interpretation, False swearing
RightsCopyright for scholarly resources published in RUcore is retained by the copyright holder. By virtue of its appearance in this open access medium, you are free to use this resource, with proper attribution, in educational and other non-commercial settings. Other uses, such as reproduction or republication, may require the permission of the copyright holder.