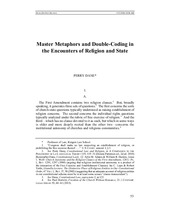 Master Metaphors and Double-Coding in the Encounters of Religion and State (2016)
Perry Dane
San Diego Law Review 53: 53-104.
Link to published version
VersionAccepted Manuscript (AM)
AbstractThis article was originally presented during a conference on “Hosanna-Tabor and/or Employment Division v. Smith” at the Institute for Law and Religion of the University of San Diego School of Law. At its most practical, the article tries to make sense of the puzzle that that motivated the San Diego conference: the dramatic divergence in our law between doctrines of individual religion-based exemptions from otherwise-applicable rules, which are increasingly under conceptual and doctrinal attack, and religious institutional autonomy, which was resoundingly reaffirmed in Hosanna-Tabor as a principle of self-conscious recognition of the authority and juridical dignity of religious institutions.

More fundamentally, though, the article builds on two main themes. First, it argues that the three strands of the jurisprudence of law and religion -- free exercise, non-establishment, and religious institutional autonomy -- are rooted in a common theme or master metaphor: the existential encounter between the state and religion and the vision of religious communities and normative systems as distinct sovereigns. Second, it also emphasizes, the importance to the legal imagination of what I call “double-coding” -- the simultaneous, stereoscopic, and mutually transposing, affirmation of both radical principle and staid doctrine. Double-coding can appear in many places in the law, but it is particularly important in contexts such as the relation of religion and state in which the legal culture is most likely to retreat into a simple-minded solipsism about its own monopoly on authority and juridical dignity. But double-coding can only work successfully if legal doctrine, whether by conscious design or not, is open at least to pointing to something beyond itself.

The article calls on both these conceptual tools -- the master metaphor of sovereignty and the possibility of double-coding -- to try to understand the divergence between the fate of religion-based exemptions and religious institutional autonomy. The article suggests various explanations for that divergence, but focuses on the essentially contingent fact that, even during their heyday, judicial defenses of free exercise exemptions never adequately responded to some fundamental theoretical challenges and (unlike doctrines of institutional autonomy) rarely allowed for the power of double-coding to shape the legal imagination.
Persistent URLhttps://doi.org/doi:10.7282/T3V40ZB9
SubjectsDouble coding, Religion & law, Religion & state, First Amendment, Free Exercise clause, Establishment Clause, Religious institutional autonomy, Sherbert v Verner, Hosanna-Tabor, Employment Division v Smith, Religious sovereignty, The legal imagination, Legal metaphors, Legal pluralism, Lewis, C. S. (Clive Staples), 1898-1963
RightsCopyright for scholarly resources published in RUcore is retained by the copyright holder. By virtue of its appearance in this open access medium, you are free to use this resource, with proper attribution, in educational and other non-commercial settings. Other uses, such as reproduction or republication, may require the permission of the copyright holder.