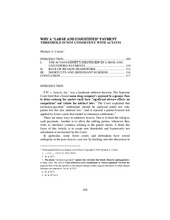 Why A "Large and Unjustified" Payment Threshold is Not Consistent with Actavis (2016)
Michael A. Carrier
Washington Law Review 91(1): 109-118.
Link to published version
VersionVersion of Record (VoR)
AbstractFTC v. Actavis was a landmark antitrust decision. In rejecting the “scope of the patent” test that had immunized settlements by which brand-name drug firms pay generic companies to delay entering the market (“exclusion payment settlements”), the Supreme Court made clear that such agreements “tend to have significant adverse effects on competition” and could violate the antitrust laws.

Some lower courts and defendants have sought to sow ambiguity in the post-Actavis caselaw by creating new thresholds and frameworks not articulated or envisioned by the Court. In particular, they have latched onto the discussion in Actavis of a “large and unjustified” payment. The district court in In re Loestrin 24 FE Antitrust Litigation, for example, imposed a framework that required analysis of (1) whether “there [is] a reverse payment” and (2) whether “that reverse payment is large and unjustified” before addressing (3) the rule of reason. The Loestrin court borrowed this framework from the district court in In re Lamictal Direct Purchaser Antitrust Litigation. And defendants have contended, for example, that “Actavis requires a plaintiff challenging a reverse-payment settlement . . . to prove, as a threshold matter, that the . . . payment was both large and unjustified” and that “under Actavis, [plaintiffs] have to prove that [a] payment was ‘large’ (as well as unexplained).”

This article offers three reasons why a requirement that a plaintiff demonstrate a large and unjustified payment before reaching the Rule of Reason is not consistent with Actavis. First, nearly all of the Court’s discussion of large and unjustified payments occurred in contexts having little to do with the antitrust analysis that future courts were to apply. Second, the Court instructed lower courts to apply the Rule of Reason, not a new framework with a threshold it never mentioned. And third, such a threshold is inconsistent with the Court’s (1) allowance of shortcuts for plaintiffs to show anticompetitive effects and market power and (2) imposition of the burden on defendants to show justifications for a payment.
Persistent URLhttps://doi.org/doi:10.7282/T3B27ZDH
SubjectsPatent, Antitrust, Drugs, Pharmaceuticals, Settlement, Actavis, Large and unjustified payment, Reverse payments, Exclusion payments, Rule of Reason
RightsCopyright for scholarly resources published in RUcore is retained by the copyright holder. By virtue of its appearance in this open access medium, you are free to use this resource, with proper attribution, in educational and other non-commercial settings. Other uses, such as reproduction or republication, may require the permission of the copyright holder.