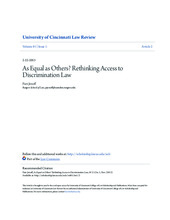 As Equal as Others? Rethinking Access to Discrimination Law (2013)
Pam Jenoff
University of Cincinnati Law Review 81(1): 85-126.
Link to published version
VersionVersion of Record (VoR)
AbstractThe purpose of employment discrimination law is to ensure fair and equal conditions in the workplace by preventing and remedying differential treatment based on certain protected characteristics, such as race, sex, and age. However, the federal anti-discrimination claiming system as presently constructed cannot achieve this mandate. The current system excludes close to one-fifth of the American workforce outright, and prevents even greater numbers of individuals from seeking redress for reasons unrelated to the merits of their claims. Stringent statutory requisites as to covered employers, administrative exhaustion, and the limitations period create barriers to access that not only prevent individuals from obtaining relief but permit discrimination to persist on a systemic level, hobbling realization of the anti-discrimination mandate. Thus, there is a fundamental tension between the broad aspirations of anti-discrimination law and the narrow constraints of the claiming system intended to enforce it.

Recent scholarship in the employment discrimination area has focused upon the structure of discrimination claims, i.e., whether the required elements of proof and burden-shifting framework are effective in addressing racism, sexism and other biases in the workplace, or whether a new, more fluid schema is required to capture the complexities of modern prejudice and its many manifestations. These articles do not speak to the more fundamental question of access to employment discrimination law.

This Article argues that there are costs associated with excluding people from coverage, including significantly diminishing the ability of discrimination law to eliminate discrimination. The Article shows how most of the arguments used for limiting the reach of employment law have never been substantiated, have been diminished by changing circumstances, or can be alleviated by altering the statutory regimes in important ways.

This Article breaks new ground by identifying the conflict between the broad goals of employment discrimination law and the limited protections of the anti-discrimination claiming system, and proposing bold systemic restructuring to widen access, while taking into account countervailing concerns such as overburdening and cost. Part I examines the evolution of the federal employment statutes. Part II considers the nature of the barriers to access, their merits as well as the problems they create.

Finally, Part III re-envisions the requirements of the anti-discrimination claiming system and offers a proposal whereby: (1) all employees would be covered by the federal anti-discrimination statutes and given access to the Equal Employment Opportunity Commission, which would have adjudicative, rather than merely investigative, authority over claims; (2) individuals employed by larger companies would be permitted to opt out of the EEOC process and proceed directly to federal court; and (3) individuals bringing claims in either forum would be given a minimum two-year statute of limitations in which to do so. These reforms would better achieve the goal of anti-discrimination law by providing protection to a wider spectrum of individuals and claims, while enabling the system to operate more effectively.
Persistent URLhttps://doi.org/doi:10.7282/T3XG9VDF
RightsCopyright for scholarly resources published in RUcore is retained by the copyright holder. By virtue of its appearance in this open access medium, you are free to use this resource, with proper attribution, in educational and other non-commercial settings. Other uses, such as reproduction or republication, may require the permission of the copyright holder.