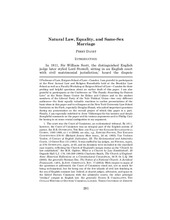 Natural Law, Equality, and Same-Sex Marriage (2014)
Perry Dane
Buffalo Law Review 62(2): 291-375.
Link to published version
VersionVersion of Record (VoR)
AbstractThe article proposes a different, more nuanced and responsive, understanding and defense of same-sex marriage. And it suggests how we might be able to transcend the still-divisive debate that lingers on the subject even as the momentum in favor of same-sex marriage has accelerated.

In their advocacy for same-sex marriage so far, proponents have tended to advance a “thin” conception of civil marriage at odds with more traditional views. This thin conception rejects any defining link between marriage and heterosexual procreation. And it resists portraying marriage as grounded in any narrative as substantial as “natural law.”

This article argues that this flattening of the idea of marriage is unnecessary to a defense of same-sex marriage. It is possible to believe that marriage is paradigmatically, even in “natural law,” a heterosexual institution, and also believe that it should be extended to same-sex couples. In fact, the law often extends rules and institutions beyond their paradigms without rejecting the force of those paradigms. A good example is the law of adoption, which accepts the paradigm of biological parenthood, but also accommodates the fact that not all children can or should be raised by their biological parents. The article proposes a structurally similar argument for same-sex marriage, grounded in what I call “analogy of dignity” – maintaining the rich traditional meaning of marriage while also explaining why it should today also be available to same-sex couples.

Just as important, the article suggests that, at the end of the day, this sort of argument from “analogy of dignity” is actually more compelling than arguments based on such reductionist slogans as “freedom to marry” and “marriage equality.” It is situational and contingent rather than detached and universal. It better reflects why many same-sex couples might care about marriage in the first place. And it connects to deep and important values such as fraternity, the Golden Rule, and basic decency.
Persistent URLhttps://doi.org/doi:10.7282/T3PN9900
SubjectsMarriage, Same-sex marriage, Equality, Natural law theory, Moral and legal reasoning, Virtue theory, Legal history, Family law, Religion, Fraternity, Adoption
RightsCopyright for scholarly resources published in RUcore is retained by the copyright holder. By virtue of its appearance in this open access medium, you are free to use this resource, with proper attribution, in educational and other non-commercial settings. Other uses, such as reproduction or republication, may require the permission of the copyright holder.