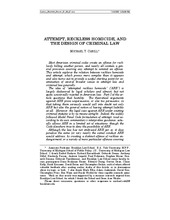 Attempt, Reckless Homicide, and the Design of Criminal Law (2007)
Michael T. Cahill
University of Colorado Law Review 78(3): 879-956.
Link to published version
VersionVersion of Record (VoR)
AbstractMost American criminal codes create an offense for recklessly killing another person, and nearly all contain a general provision covering any attempt to commit an offense. This article explores the relation between reckless homicide and attempt, which proves more complex than it appears and also turns out to provide a useful starting point for examination of several broader issues in attempt law and criminal law generally.

The idea of attempted reckless homicide (ARH) is largely disfavored by legal scholars and almost, but not quite, universally rejected in American law. Part I of the article questions that hostility. The theoretical arguments against ARH prove unpersuasive, or else too persuasive, in that taking them seriously would call into doubt not only ARH but also the general notion of having attempt liability at all. Moreover, the legal case against ARH under existing criminal statutes is by no means airtight. Indeed, the widely followed Model Penal Code formulation of attempt, read according to its own commentary's interpretive guidance, actually allows ARH in a limited set of situations, though the Code elsewhere tries to deny the possibility of ARH.

Although the law has not embraced ARH per se, it does penalize the same (or very nearly the same) conduct ARH would address, by creating a distinct offense of reckless endangerment, or a variety of more particular offenses covering specific forms of dangerous conduct, or both. Yet as Part II of the article discusses, the endangerment-offense solution to the ARH puzzle creates its own practical problems and raises a distinct set of questions about how to formulate criminal-law rules. The idea of writing a single attempt provision expansively covering any conduct that risks, but does not create, a criminal harm seems rooted in a sense that criminal law works best by establishing relatively few general rules of broad application. By contrast, the idea of identifying particular types of risky conduct and criminalizing each with a specific offense, such as reckless endangerment, indicates a sense that criminal rules should be narrow and precise rather than broad and flexible.

The article explores these two visions of how to write criminal law - which I call the thin-code and thick-code models, respectively - and describes how the choice between thick and thin is not merely formal, but may have significant practical consequences. Though each model has its independent merits, indiscriminately mixing the two is likely to make for a poor and problematic criminal code. Sadly, though, such thoughtless blends of thin and thick are all too common in our criminal law; if anything, they seem to be increasing.
Persistent URLhttps://doi.org/doi:10.7282/T31C219D
SubjectsCriminal Law, Model Penal Code, Attempt, Homicide
RightsCopyright for scholarly resources published in RUcore is retained by the copyright holder. By virtue of its appearance in this open access medium, you are free to use this resource, with proper attribution, in educational and other non-commercial settings. Other uses, such as reproduction or republication, may require the permission of the copyright holder.